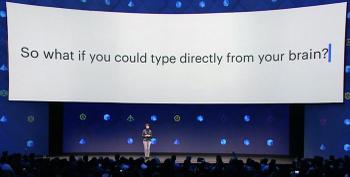 Facebook announced a brain-computer interface during their recent F8 conference. To be clear – this is an R&D moonshot, but it must be showing promise enough to be announced.

In today’s world, our brains are fast, computers are fast, and the cloud is vast. The greatest bottleneck is the dreadfully slow interconnects between these things. Keyboards, screens, and even voice, are only capable of slow information transfer, and there’s increasing focus on new interfaces.

In this case, Facebook is exploring he use of non-invasive brain scanning to determine what words you’re thinking of. Presumably this will need to be trained per individual, using neural networks to match brain patterns with words.

Other related (non-Facebook) ideas include a very small device being embedded inside the brain itself. This should be more sensitive than scanning through the skull. In sci-fi, and popularised recently via Elon Musk, we could expect a fully embedded & integrated ‘neural lace’ within our brain at some point. This would enable highly detailed and high bandwidth information to flow bi-directionally between humans and computers / the cloud, and it would also enable far more intimate and complete human to human connections.